Following a massive rally during the previous session, stocks halted on Thursday, with the major equity averages finishing the day fairly lower.

The ongoing fighting in eastern Europe, as well as the supercharged inflation readings, have triggered aggressive selling early in the day. Stocks recovered later in the session and finished well off their lows, but still ended the day in the red.

The overall trend of price in S&P500 looks bearish. Price seems to be reacting to the resistance zone between 4322 and 4277.56 which is in confluence with the Fibonacci retracement levels. Price is trading below the 50 EMA which indicates a bearish continuation. The RSI and MACD are the bearish movements of the price. 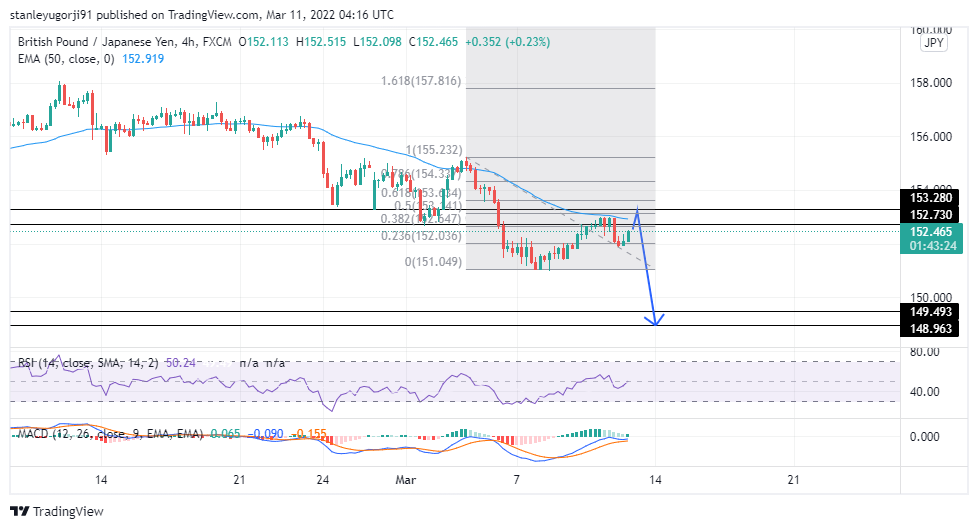 In addition to the current geopolitical situation in eastern Europe, the latest COVID update in China is weighing the currency market overall. As the Japanese Yen hold, the Sterling pound remains to fall. This trend is affecting the GBPJPY cross which is showing a high probability of a free fall. Also weighing the quote could be the pair traders’ caution ahead of the UK’s monthly data dump.

The overall trend for GBPJPY looks bearish. Price seems to be fighting the minor resistance zone between 153.280 and 152.730 which is in confluence with the retest of the 50 EMA and the 38.2 Fibonacci level. It is likely seen that the price continues in the bearish direction after the retest. The RSI and MACD show the likelihood of the previously mentioned downward trend.

Boeing fell 1.5% in the premarket amid the reveal of the final safety directives by the Federal Aviation Administration (FAA) aimed at fixing engine issues on Boeing (BA) 777 jets. Boeing shall now layout the steps airlines will need to take to meet the FAA’s requirements.

From the overview of price, the overall trend looks bearish. It is clearly seen that the price is making a pullback to the support zone between 187.99 and 184.69 which is in confluence with the Fibonacci retracement levels and a possible retest of the 50 EMA before heading to the downside. The RSI and MACD are below the centre-line which indicates a continuation of price in the bearish direction.